Drama Society puts on a play to remember 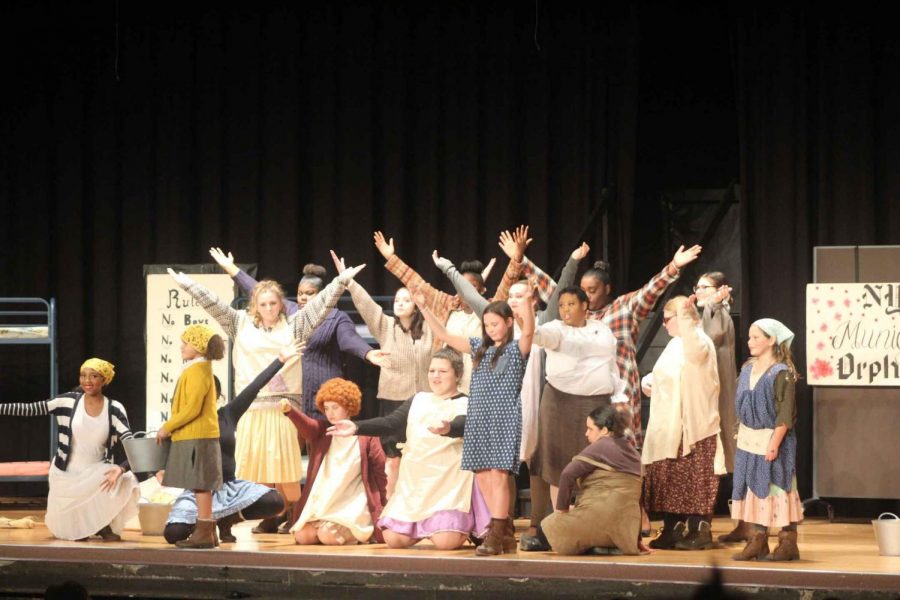 Drama Society members and kids posing as they finish one of the songs of the night.

Presented by the Drama Society, the musical production of  “Annie” was held on Thursday, Feb. 13 at Roseville Middle School. Annie (sophomore Savanna Kraft) is about an orphan girl who is put into an orphanage that is run by the wicked “Miss. Hannigan,” (senior Ranisha Scott) while Annie believes that her parents left her there by accident. “Oliver Warbucks,” (junior Devin Demers) brings Annie to his mansion with the help of “Grace Farrell,” (senior Rachel Hyde) in hopes of adopting her and bringing her into a more healthy household. However, Annie wants to find her real birth parents, so they produce a commercial in order to find them. “Daniel Francis,” a.k.a “Rooster” (freshman Christopher Cameron) and “Lily St. Regis,” (freshman Gabriel Calhoun) claimed to be her “real birth parents” but turned out to be frauds when the locket necklace they had was not the same as the one around Annie’s neck. Warbucks then tells Annie that her parents have passed, but then decides to adopt her with the decision of the judge (english teacher Eric Mattison).

Choir and drama teacher Kristina Collins as well as the production staff worked endlessly over the last few months with her cast to make the play a remarkable one.

“There were definitely some hard parts, but overall I’m glad it turned out the way it did,” Kraft said.

At the end of the night, the entire cast took bows with each other, leaving the audience in aw.  A few seniors in the play made a small speech on their experiences in high school drama as they start the next chapter in their life. They have made many friends across the way and expressed how much they have enhanced their singing and acting skills overall since their freshman year.