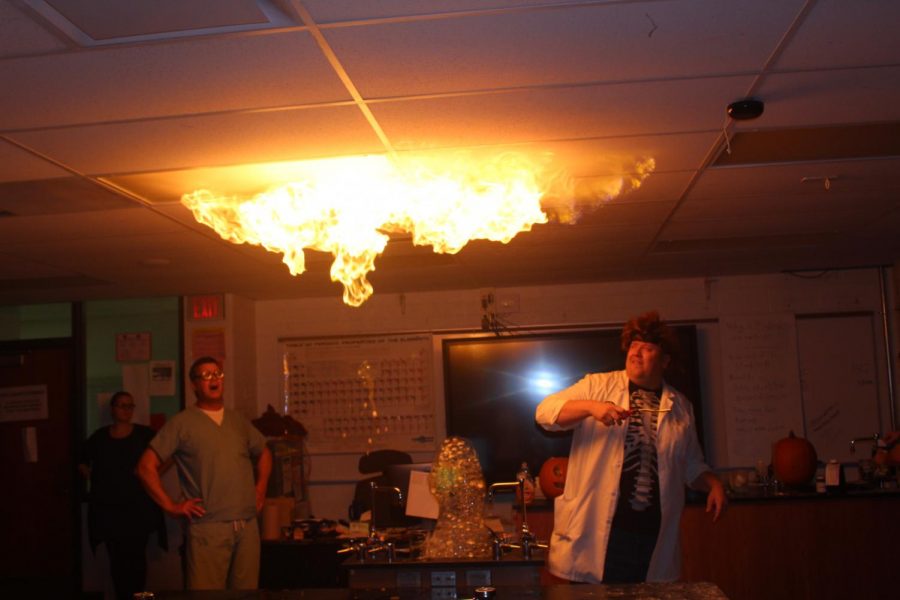 Biology teacher Bob Smitka lights bubbles in the air that cause a ripple effect across the ceiling.

When it is Halloween at RHS, students can always count on one thing—biology teacher Bob Smitka bringing fire and explosions to the classroom. Every year, Smitka dresses up as a mad scientist and puts on a Halloween-themed science show for students. This year, it was hosted in science teacher Brian King’s room and Smitka had the help of new teacher Reed Stevens in the spooky science setup.

Smitka started his show with the electrocution of a pickle, causing a mini explosion that lit up in the dark. Sometime after that, he filled his mouth with cornstarch and lit his blowtorch. Students watched in awe as he was able to blow fire into the air.

Next up was his most notorious show—holding and swinging around fire in his bare hands. As Stevens set up the bubble-maker, Smitka covered his hands in water and prepared for the real show. He picked up a handful of the bubbles and took a lighter to them as students watched the bubbles erupt into flames in his very hands. With the encouragement of students, Smitka even lit some bubbles that were floating up to the ceiling, causing a ripple of fire to go out across the ceiling, effectively amazing the crowd.

Students soon began to be able to participate as well. Many people ran up to wet their hands and arms and grab a handful of bubbles for Smitka to light. Some teachers were so intrigued that they got up to hold the fire as well. As the class came to an end, Smitka reached into his pockets and threw candy out to the crowd.

“I liked that students got to participate. My favorite part was when Mr. Smitka lit the bubbles in the air on fire and it spread across the room,” senior Tori Lawrence said.