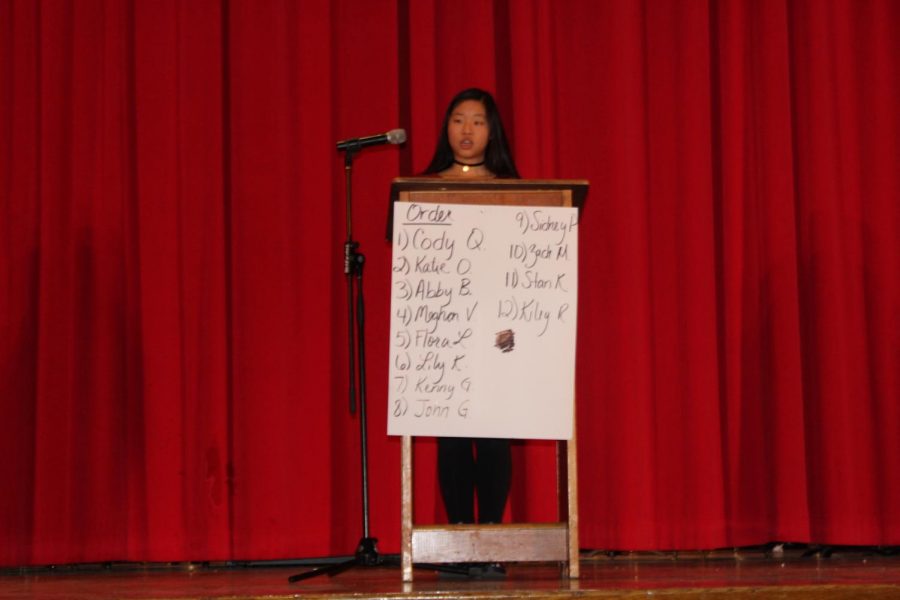 Friday was a big day for the students taking Advanced Placement (A.P.) U.S. Government. They were challenged with the task of not only preparing a speech, but also memorizing it and presenting it on stage. These students were participating in a project called Project Soapbox, which was created by Mikva Challenge to get teens to speak out about issues they believe in. Project Soapbox’s site, mikvachallenge.org, says, “The soapbox speech originates from the days when speakers would elevate themselves to an audience by standing on a wooden crate, or soapbox, to make an impromptu speech about a political topic or community issue.”

Emily Collias, the A.P. U.S. Government teacher, made Project Soapbox a little more challenging for her students. They had to do their speech about an issue that concerned the government in some way, whether it dealt with laws, political views, or the government’s structure itself. The speeches had to have emotion and impact while staying around three minutes.

“It’s limiting to not be able to say everything you want to say,” junior Zachary Merkle said.

The speeches presented by the students were unique, and many different issues were brought up. Some topics that were spoken out about include fossil fuel conservation, college debt, and standardized testing. Junior Flora Luo spoke about how fast fashion is detrimental to society and our planet. According to her speech, Bengali workers are paid under a dollar an hour, and 85% of the 16 million tons of textiles made a year end up in landfills.

“Fast fashion is a big issue that hurts people and our environment. I thought it was important to talk about because of how it’s really harmful and yet few people know about it and how to help,” Luo said.

Luo and her classmates did not just present these issues while standing at the whiteboard, they had to do it on the stage in the school’s auditorium. Doing this gave the students a feel for what it is like to speak at conferences like a TED (Technology, Entertainment, and Design) talk. During their speeches, they were graded by Collias, but also the two judges from Mikva Challenge. Luo, Lily Kalcec, and Cody Quiroz, the winners of Project Soapbox will go on to perform at the Detroit Institute of Art, where they will compete against the other winners in the district.

“The speeches were really diverse and I liked them a lot,” junior Sidney Peters said.