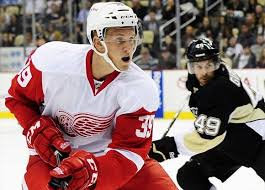 Every sports fan has that one memory that has always stuck with them and became the highlight of their team. Whether it is Detroit Tigers’ outfielder Magglio Ordóñez hitting a walk off homerun in game four of the 2006 American League Championship Series to punch their ticket into the World Series or Detroit Red Wings forward, Darren McCarty taking revenge on Claude Lemieux after a devastating, dirty hit on Kris Draper which lead to the best line brawl in NHL history everyone team has that one moment. Or even the 2004 Pistons and their fans showing their willingness to fight through adversity with an all out brawl vs. the Pacers on their way to the NBA Championship. However, you can always be on the team with a good outcome. Detroit outfielder Torii Hunter narrowly missing a grand slam off the bat of Boston Red Sox David Ortiz which fueled their comeback in the 2012 American League Championship series.

This year the Red Wings will have one of the unfortunate outcomes when we miss the playoffs after securing a spot for the last 25 years in a row. Our dominance from the 90’s is over, and the team is headed down the gutter. It was evident after three straight years of early first round exits that the team needed a change. Unfortunately our General Manager Ken Holland did not think that we needed one. A quote by Albert Einstein once stated, “Insanity: doing the same thing over and over again and expecting different results.” Holland threw out the same team as the years past and with a few minor changes and nagging injuries the Wings began to tank. Right now most Wings fans are thinking either we need to get a new team, or maybe we just need to get a new GM. Holland does not have a great track record with any free agency signings highlighted by an 11 year, 43.5 million dollar deal to Johan Franzen that has not seen ice time in nearly two years.

Unfortunately this year the best players on the Red Wings team this year are also two of the oldest with Captain Henrik Zetterberg putting up 68 points on the season and goalie Jimmy Howard holding on to a 2.10 goals against average and a .927 save percentage.

The way to bring your team back into contention is through the draft and farm system. The Wings will need young players to become elite if they do not want to start up a losing streak.One positive thing stemming from our disappointing season is that we will have a 7th overall draft pick. In the new Draft Lottery format in the NHL any team that misses the playoffs has a chance to the top three picks. Also depending on how much your team sinks you would have a better chance at winning the top pick. The future also looks bright because of young Red Wings speedster Andreas Athanasiou, sniper Anthony Mantha, and offensive defenseman Nick Jensen. They all had break out seasons and they are expected to be even better.

The Red Wings fans are hoping that we can come out next year and begin another playoff streak, and to keep on trucking. However there is a difference between making the playoffs and being effective in them. Since our Stanley Cup win in 2008 and our championship loss in 2009 the team just hasn’t made a push in the playoffs. We have managed to be a team that barely squeaks in after superstar defenseman and captain, Nick Lidstrom, retired after the 2012 season. My hope is the Red Wings make a change into the core of our team and come out in a few years like the Cubs of 2016.