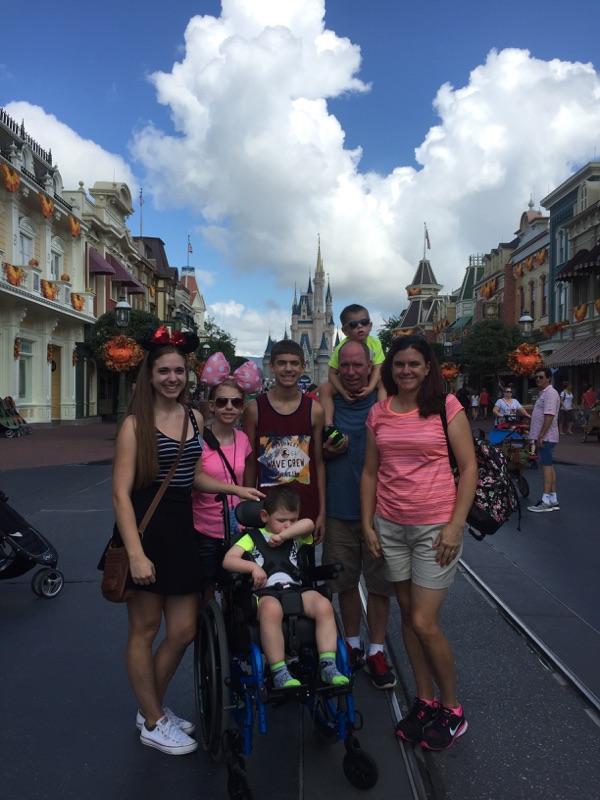 A picture perfect moment captured by all seven members of the Major family as they enjoy Nathan's wish at Disney World.

Behind every welcoming “hello” of each individual encountered throughout one’s day, is a life where both highs and lows are destined to be present. Though life’s many obstacles seem to be inevitable, dreams and aspirations are what ultimately overcome them. For the Major family, The Rainbow Connection not only made their dream come true, but also gave them a sense of relief.

On March 16, 2012, RHS junior Brittany Major and freshman Ian Major, along with the rest of their family, gained twin brothers, Connor and Nathan Major. Four months after his birth, Nathan suffered from an unexplained traumatic brain injury. Since then, he has had three different surgeries on his brain, and is currently diagnosed with Epilepsy, Cerebral Palsy, high muscle tone, cortical vision impairment, and is also severely developmentally delayed.

Not only Nathan, but all members of his family are also affected. Resulting from Nathan having multiple appointments and therapies weekly, their dad, Mike, quit his job. Also, not all treatments in which Nathan must receive are covered by insurance, which affects the family financially. Things little as daily activities must be altered to take care of Nathan, which in turn has given the family a new way of life.
“Every day there are struggles, but in the end positivity and hope is what keeps us strong,” mother Lisa Major said.
After being referred by both a family friend and doctor, the Major family received a call in December of 2014 that Nathan was qualified for a wish given to him by The Rainbow Connection, a nonprofit organization whose mission is to grant wishes to Michigan children with life threatening illnesses. A Rainbow Connection coordinator soon arrived at their house, in which she requested to know where Nathan would like to go. Nine short months later on Sept. 30, the family’s bags were packed, and they were off to Florida for Disney World.

After getting off the plane, all seven Major members headed to Give Kids the World Village, a mini city where children and their families from all around the world are granted a wish stay. Throughout their entire trip, they were given their own food supply, free car rentals, $1,800 spending money, and tickets for all four Disney parks: Clearwater Marine Aquarium, Gatorland, Universal Studios, indoor Skydiving, Sea World, Golfing, and much more. In addition to those many tickets, the family was also invited to Mickey’s Not so Scary Halloween Party, in which the family dressed up as their favorite characters, featuring Nathan as Prince Charming.

“This experience that Rainbow Connection provided for my family and I gave us a once in a lifetime opportunity and provided hope for the future,” Brittany said.