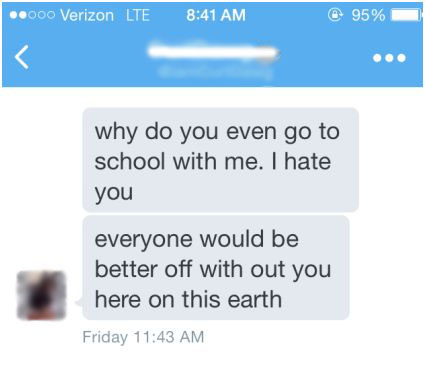 Students get carried away with social media, thinking their words have no effect online.

The internet, which originally started off as an innovative tool and new piece of technology, has become a way for bullies to hide behind a screen and protect themselves. Every day people are bullied via the internet, which has become known as cyberbullying. The occurrence of cyberbullying has expanded extremely to the point where bullyingstatistics.org states that half of adolescents have been bullied online, and sadly, the same amount have been the bully behind the screen. Most bullies do not realize how much their cruel words affect the victim, especially when it is online for everyone to see.

An average of 20 percent of teenagers that are cyberbullied consider suicide as an escape, and about one in ten attempt it, say sources at cyberbullyhotline.com. Cyberbullying affects a student’s performance in school, and even their attendance. A shocking three million students are absent per month, due to the bullying that they experience online, because they are afraid to see how they will be treated in school. When another person, the bully, has that big effect on how a student is feeling, it is clear that it is a big problem. It has been proven, and a well known fact that bullying in general contributes to people having an increase in anxiety, more specifically social anxiety, and even depression. Even though most people pretend that they are fine, there is a bigger monster inside them that is left locked up. Since 1996, suicide has been the third leading cause of death in teenagers ages 15-24, according to the NAMI. For years, parents and elected officials have been trying to get policies and laws put in place protecting victims against harassment online, and most have been successful. Since 2006, the number of legislation about cyberbullying has increased, and now all 50 states have some sort of policy or law on cyberbullying, but according to stopbullying.gov there is no federal law that applies to bullying. While that all sounds great, the disappointing fact is that less than one in five incidents of cyberbullying are reported, and even less action is taken once the incident gets reported.

Social media is for all to see

Many people misuse and misinterpret the meaning of social media. Social media by definition means computer-mediated tools that allow people to create, share, or exchange information, ideas, and pictures/videos in virtual communities and networks. Thus meaning that everyone is allowed to see it. It is impossible to remove something off of the internet because no matter what, it is still there. With improper use of social media, it could affect one’s life greatly because a lot more people are more than willing to say something harsh online than in person, making them seemingly invincible. When someone does not see how their online actions affect other people, it is a green light to keep going. A lot of people handle bullying in various ways but it does have a negative impact on the victim’s life in general. Social media is a gateway to use force, threat, or coercion to abuse, intimidate, or aggressively dominate others. It is something out there for everyone to look at, as with face to face bullying, it may be done with seldom to no people around at all. Many victims ponder about what others may think of them and their personal image. In the least to say, it is an embarrassing scenario to be in. Bullying, sometimes, being a habitual act, it only gets worse for the victim. Point is, a post on a social media website is looked at by any and every one, in most cases. Knowing that everyone is capable to see it, is even more distressing to the victim.

All in all, social media was not created to bring others down. It is supposed to be an efficient way to connect and communicate with others, whether directly or indirectly through posts, videos, and/or pictures.  People have a lot of freedom, of course, but need to use that freedom at their own risk. People should think about what they say so that in the long run, they are not hurting anyone else. Someone placing themselves in someone else’s shoes is of course harder to fully experience what it is like to be really hurt by a post until it happens to them, but everyone has feelings and cares about what people say. What good do people feel by belittling someone else publically?

What it all means: be a hero

Why let it continue though? Many are often afraid about speaking out or defending a bullied victim or even someone who had a callous post made out to them. Cheering on or even being quiet does not help anything because in the bullies’ perspective; they believe they are not wrong for tormenting another person. Some people may not want to tell another person for various different reasons; in the long run, it is extremely detrimental to them. Speak out against cyberbullying; help another person out. It is not “getting involved in something you do not want to be in,” it is being a hero and taking that victim out of a dangerous position. Everyone has a purpose or goal in life, people should be compassionate enough to help one another in time of peril. Stand up and speak out, everyone cannot do everything by themselves. It is hard to recognize, but many people depend on others for a lot of thing, because they are only human. Many are easily overwhelmed by a plethora of feelings that consumes their lives when they are in a position where no one seems to be there for them. In other words, they can only handle so much in life until they explode; almost as if rocks are continuously being thrown at them. Cyberbullying, unfortunately, continues today, but it is never too late to stand up for someone and take action.