Order of the Pink Ribbon 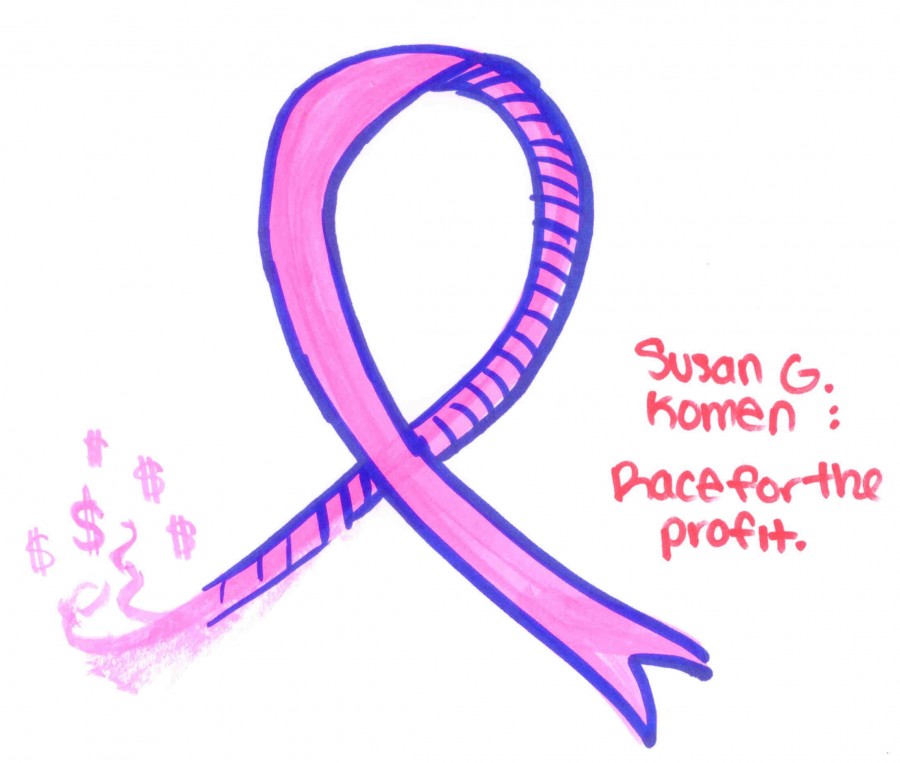 As everybody knows, October is the National Breast Cancer Awareness Month. The first thing to pop in one’s head is the notorious pink ribbon. Eventually a plethora of these pink products litter the shelves of every store. Ranging from stationary to jewelry and even food, no product is safe from Susan G. Komen. Whilst the intentions are pure, people, and mostly their pocketbooks, are unfortunately being taken advantage of in this pastel fantasy. That pink ribbon isn’t all that we think it is.

Raising millions of dollars every year, Susan G. Komen for the Cure is the largest and most well-known breast cancer foundation in the United States; and perhaps the world. This fame has grown over the last 30 years as begun by the not-so-famous Charlotte Haley. Haley started her journey to educate the public on breast cancer as it has plagued her family. Few know that the pink ribbon was initially peach and not distributed by big businesses, but instead that single woman. Her actions attracted the attention of Self magazine partnered with Estée Lauder who offered her quite the contract to form a team. Haley refused to sell out and though she has passed away, her family supports her decision to this day.

Nancy Goodman Brinker, the founder of Susan G. Komen for the Cure, just so happened to be the runner-up for establishing a breast cancer foundation. Founded in 1982, Brinker established Komen after her sister, Susan, died of the cancer. It’s safe to say Brinker was successful in her endeavor. Who does not already know about breast cancer? With Komen, it seems that the awareness campaigns have crossed the line into organized self-promotion.

With over 100,000 volunteers, hundreds of affiliates, and the largest fundraising event, Komen rolls in a hefty check every year, according to their website, komen.org. One would think this money is used to find a cure but that is not the case. Brinker won the war when it came to the awareness of breast cancer, so why is it that only 15% to 20% (depending on how Brinker feels that year) is used to actually put toward finding a cure. Nearly 45% of the money is used for education, though everybody already knows the pink ribbon. (Statistics courtesy of charitynavigator.org and reuters.com) If Brinker can afford a six figure salary for herself and the other big wigs at Komen, it should not be a declining amount of money that is put towards finding a cure. With so little being used to actually fine a cure, it’s even worse to hear that Komen uses donations to pay for legal charges against other organizations that use “for the cure” in their name.  Individuals and private companies work hard to donate the money that they do, and it’s unfortunate that Komen is taking advantage of them; but it doesn’t end there.

“Pink-washing” is a popular tactic used by companies of all classes to sell their products. By simply veiling a pink ribbon on their logo, an organization will earn a disproportionately large amount of publicity, and revenue, for donating very little. Pink-washing is most renowned in the Yoplait case. It seemed that if you donated the special pink lids from your Yoplait brand yogurt, Yoplait would donate a measly $.10 per lid when customers paid four times that donation just to pay for shipping. Not to mention ingredients in the popular yogurt were believed to have had properties that caused cancer. Irony at its best. Pink-washing was also used by KFC, Mike’s Hard Lemonade, Ford, and Smith and Wesson. Each company was under fire for their misuse of the pink ribbon, as obesity and the use of alcohol both lead to an increased chance of contracting cancer. Ford, who released a special edition pink car, did not happen to realize women who worked in their plants had a higher rate of contracting cancer from dangerous fumes. Finally, Smith and Wesson thought it was a grand idea to sell a pink hand gun. Guns are the second leading cause of violent death in women. It’s no surprise Komen use their own tactic with their perfume, Promise Me. Turns out the perfume contained harmful chemicals that could cause cancer. While they planned to change the formula, they had no interest in taking the already shelved stock out of stores. Besides these examples, most other companies use the pink-washing just to increase main revenue. Often they require proof of purchase from customers before donating or they have a donation cap.

Aside from taking advantage of their following, Komen is affiliated with the “Save the Boobies” organization. Their juvenile slogan completely dismisses the victim and only cares about their breasts. And what about males with breast cancer? Do they get no support either? What about those who have metastatic cancer, a situation in where the cancer spreads to another part of the body. What once was breast cancer is now another form of cancer. Are we forgetting those patients as well?

Awareness is only one part of the progress, and that ship has sailed. It’s time for Komen to either step up, or consumers to stop buying into this ploy. The only ones benefiting from the malignant relationship are greedy CEOs. Things aren’t as pretty in pink as we are led to believe.